HTC’s next flagship phone, the HTC U12 (or HTC Imagine), may have been spotted in real life. The smartphone is believed to have been shown off at a 5G event in Taiwan (via @evleaks), where HTC displayed the capabilities of the new mobile network.

We don’t get a full hands-on look at the handset, but the video, from the SOGI YouTube channel, gives us some details. The phone features a “bezel-less” 18:9 display on what is likely to be a 6-inch display, similar to the U11 Plus.

You can see one of the handsets in the clip hits an impressive 809.58 Mbps download speed, meaning the device must be powered by a next-generation chip, presumably the Snapdragon 845 which houses a Qualcomm X20 LTE modem for download speeds up to 1.2 Gbps. 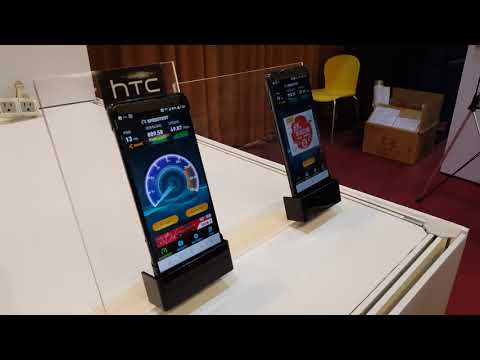 Disappointingly, we don’t have many other details on the device right now. The smartphone in the video may just be anonymous demo model, and HTC may not even have a go by the name of the U12 on the horizon. But with @evleaks also passing it on and suggesting this is HTC’s next flagship, there’s a good chance that it’s legit. Give us your thoughts on it in the comments.

The Elder Scrolls: Blades is a first-person RPG for mobile — and it looks sick

Does the Pixel 3a support wireless charging?